The KTM 450 SX-F is on top of the world coming into 2019. It has won six national championships in six years, and it’s generally considered the bike to beat in racing everywhere. What happened? Relentless change, that’s what. Even when it seemed that change was unnecessary, the KTM has continued to morph and evolve. This year’s bike is a perfect example. Despite all its success, the KTM 450SX-F has dramatic changes for 2019.

WHAT’S NEW AND WHY
The 2018 450 was already the lightest and fastest bike in the class, but the others are catching up fast. A few years ago KTM had the only electric-start bike in the 450 class. Not anymore. KTM once had the only hydraulic clutch. Not anymore. Feature for feature, KTM has competition in 2019, and the engineers in Austria know it. From this point forward, gaining any ground is going to require greater effort. Case in point: the 2019 450SX-F has an entirely new frame. It doesn’t look any different, but it’s 10 percent stiffer torsionally and 2 percent stiffer longitudinally. The headstays between the head and frame are now made from aluminum, and the top triple clamp is more rigid. The wiring harness, fuel pump and battery are new. The subframe is longer, and the swingarm is different; all difficult changes that are almost invisible. You can, at least, easily see that the bodywork is different. The list of motor changes is even longer. The most important change is the cylinder head, which is a more compact design that is 500 grams lighter. The camshaft provides shorter valve timing and has a different surface. The throttle body was reworked, and upstream from there the whole intake system is slightly tweaked. The radiators are new, the exhaust system is new, and on and on. Even the parts that aren’t really new have subtle changes. The WP AER 48 air fork was always designed to have its own balance chamber, even though it isn’t externally adjustable. This is a self-charging chamber that opposes the main air spring. That chamber is now smaller, and there are valving changes. The WP shock has a different piston design and its own valving changes. The bottom line is that KTM knows the 450SX-F is a target for all the other manufacturers. The goal is to make it like a cold-war arms race—to make it too difficult and too expensive to match the 450SX-F’s technology toe to toe.

WILL IT WORK? KTM’s changes haven’t reached the point of diminishing returns yet. Last year the 450SX-F was the most powerful bike on the track. Now it’s more powerful. You can’t point to any one spot in the powerband and say, “Right there; that’s where it has more than last year,” because it gained power everywhere. So, in case you were late to the party, that means the KTM makes power that is nothing short of incredible. It’s still very linear and smooth, but it starts with more and ends with more.Of course, the true usefulness of all that power is debatable. We know that average riders can’t use all the power of any modern 450. But that doesn’t mean that we average guys don’t use all that power sometimes. Sometimes you need to charge up a long, steep hill at full throttle. Sometimes you need to pull your way out of a soft patch. Sometimes you just want to have fun. The trick is in keeping the power at bay when you don’t want it, and the KTM still scores well in that department. The motor pays careful attention to how far open the throttle is being turned, and when it’s only half open and the revs are low, the KTM is actually pretty gentle. It doesn’t thrash you with harsh engine braking, backfiring or any tendency to stall whatsoever. If you need further assurance, KTM rethought the optional Map two on the handlebar switch. Previously, it made almost no perceptible change. Now, it gives the bike a more linear delivery, although we hesitate to call either map mild or aggressive. Both are formidable. Likewise, the traction control function isn’t going to change your life. It makes a subtle difference that gets more noticeable in slippery conditions.

Bên trong KTM
The 2019 KTM 450SX-F doesn’t look dramatically different, so the fact that it is different can catch riders by surprise, particularly if they have grown accustomed to the previous model. Right away, it’s apparent that the bike is narrower in the front. This wasn’t necessarily on the list of new stuff, but it’s undeniable. So is the stiffer frame, but this gets confused with the suspension feedback. The bike feels stiffer, and it made us want to reduce air pressure or compression damping. The recommended air pressure is 157 pounds or 10.8 bar. Most riders prefer less, although this is very much a matter of rider weight and preference. This year we didn’t have anyone who wanted more air pressure than the published amount, and some went as low as 135 psi. Those same riders generally liked more sag in the rear shock, often over 110mm. The stiffer frame is a concession to very high-level riders who always want a more rigid frame, but the KTM’s suspension has true adjustability. You can make it feel just like the old frame if that’s the bike you’ve come to know and love. 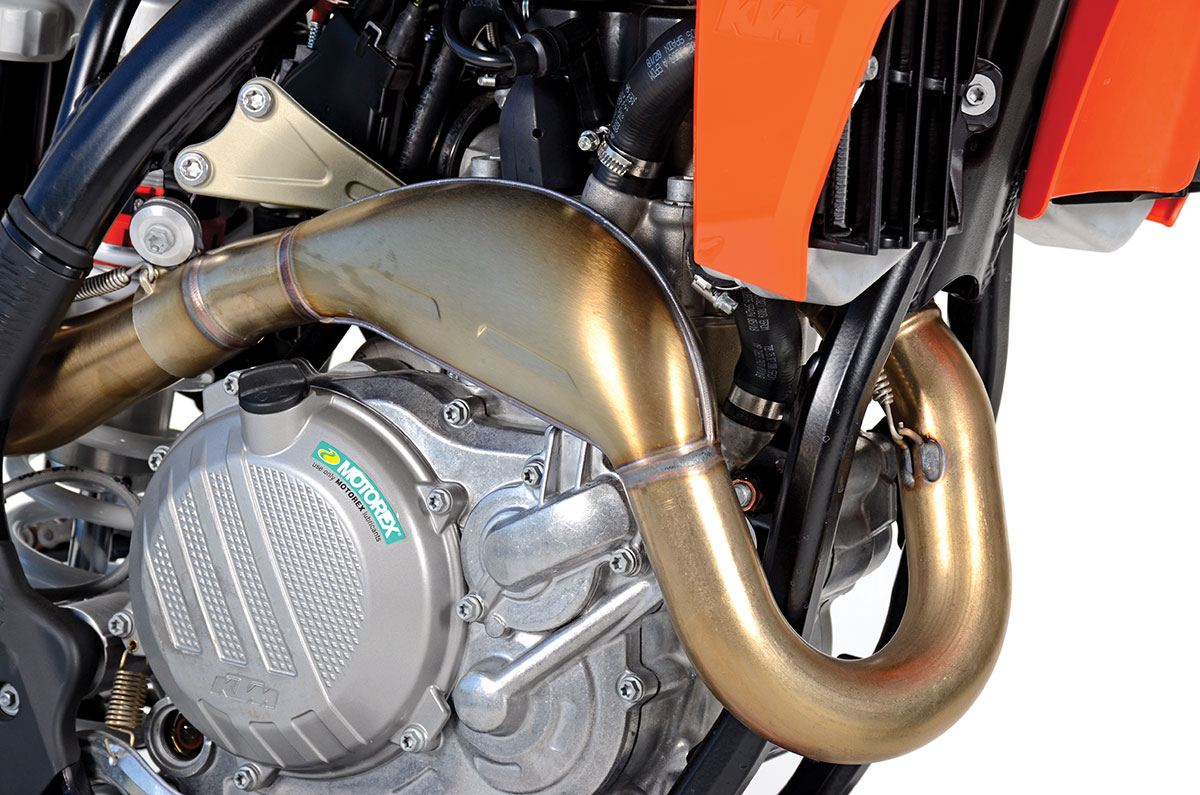 We’re still big fans of the 450SX-F’s overall handling. The bike’s personality is hard to describe simply because it doesn’t do anything weird. It’s stable in a straight line, and it’s well-planted in turns. You can’t say that it prefers to be backed into turns like a Yamaha or that it’s a point-the-front-wheel type of bike like a Suzuki. The KTM is neutral; it will do anything you ask. Part of the magic is undeniably its light weight. The KTM weighs 223 pounds without fuel on our scale. Most other 450s push 240 pounds. We don’t get it. How can the bike be so much lighter? Yes, the air fork accounts for a couple of pounds, but it seems no one else is close, and it is reflected in the way the bike behaves and how easy it is to ride.

BONUS ROUND
Aside from the bike’s freakishly low weight, there are a number of other advantages that put it in the bank. The clutch, for example. Never mind that KTM has had hydraulic actuation for 20 years, because the design and durability of the clutch itself are excellent. The diaphragm-spring design gives it a light pull and a great feel, plus we know from experience it will outlast any other clutch on the market. Example number two: the brakes. KTM still has the best brakes on the market. In this case, others are getting close, but we haven’t yet found anything better than KTM’s Brembos. Many of the other traditional KTM perks have found their way onto other makes. High-end handlebars and controls are standard on Japanese bikes now. There are other areas where KTM might even have to play a little catch-up. Yamaha’s smartphone EFI tuning technology, for example, makes the KTM’s system look primitive. KTM’s philosophy of continual change has served it well up to this point. The new 450SX-F is, once again, a better bike than it was. The bonus for us is that KTM has made Honda, Yamaha, Suzuki and Kawasaki better too. 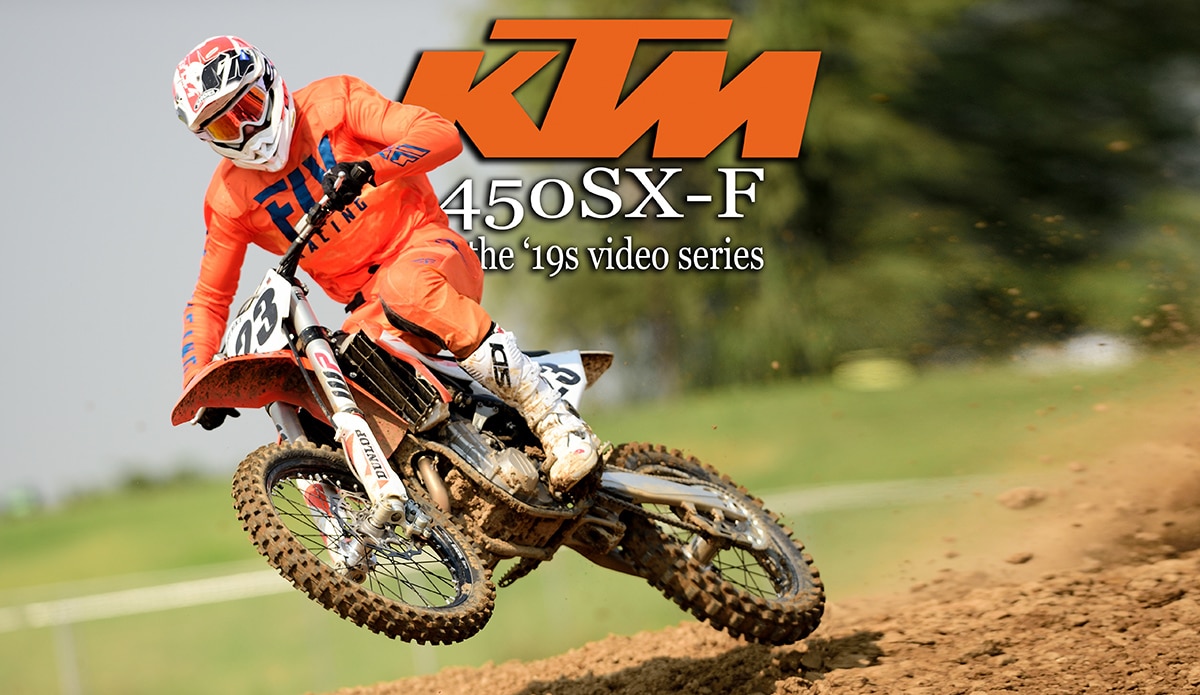 Your personal data will be used to support your experience throughout this website, to manage access to your account, and for other purposes described in our chính sách riêng tư.